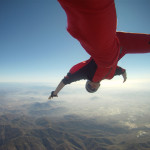 BANZAI! Banzai skydiving is an extreme sport homegrown in Japan. Its two physical components are the banzai skydiver and the banzai parachute. Mechanics, fly to 10,000 ft. (3,000 m), throw your parachute out the aircraft door, wait two seconds, and then dive after it. For a successful skydive, you must secure your parachute and glide safety to the projected landing point.

Moonraker, the eleventh James Bond film is one of the best examples of banzai skydiving. The action sequence fits our mental image of the banzai jump. As I’m sure Lewis Gilbert intended it too. The banzai parachute was thrown from the plane concluding a fight between the pilot (Jean-Pierre Castaldi) and Bond (Roger Moore). The parachute was worn by the pilot. Bond seemed to feed into the pilot’s plan of escape by throwing him out the door with his parachute. The banzai skydive was initiated by Jaws (Richard Kiel) by giving Bond a shove out the door. That’s what I call a diver exit. Bond tumbles and then reaches stability in freefall.

With options limited, bond spots the pilot, i.e. parachute, tucks his arms and swoops. After a brief struggle, Bond takes the parachute and slips on the harness. No step-through on this rig. Just snap the belt. Of course Jaws must ensure Bond’s demise and attempts to dock biting his leg. Bond pulls the ripcord to safety. Does Jaws and the piolet qualify as fictional banzai skydiving deaths? Fortunately for Jaws he lands in a in a trapeze after falling through a circus tent. As for the pilot his whereabouts are unknown. Eighty-eight jumps over five weeks of filming were required to film this sequence making it our No. 1 banzai skydiving video.

Is banzai skydiving real or is it only in the movies. You bet it is! It’s actually a Guinness Book of World Records category. Skydiving banzai style has deep Japanese roots. 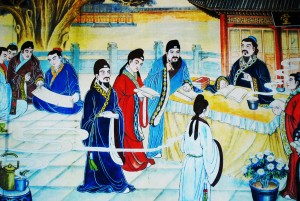 Banzai describes both happiness and a last ditch effort to get out of a really bad situation. The first expressions of joy rang out during the Chinese Chin Dynasty (255-207 B.C.). Banzai became much more sinister during WWII. Banzai charges were costly and terrifying aiming to fulfill military honor or Bushiduo. Today banzai is attached to things that bring us joy and danger, i.e. banzai sushi, banzai racing, banzai water slides and banzai skydiving. So who has taken this extreme sport to the limit? 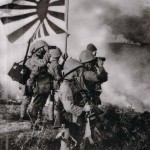 The banzai skydiving world record goes to Yasuhiro Kubo. Kubo earned the world record September 2, 2000. His record is still unchallenged, unbeaten and permanently archived in the Guinness Book of World Records. To Banzai Skydiver Magazine’s dismay, the world record is recorded as a no parachute skydiving Guinness record  in 2000 on Yasuhiro Kubo website skydiving.jp. Guinness World Records has it categorized correctly. He is a modest man. Nevertheless, his record does stand in the Banzai Skydiving category.