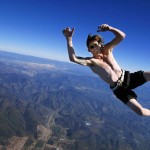 Is banzai skydiving real? You bet it is! In fact, Banzai Skydiving is a category in the Guinness Book of World Records. The banzai skydiving world record goes to Yasuhiro Kubo. He won the title Sep 2, 2000. Kubo was taken up to 10,000 ft. were he then threw his parachute out the door of the aircraft. He waited 50 seconds and jumped to retrieve it.

Banzai has a dua 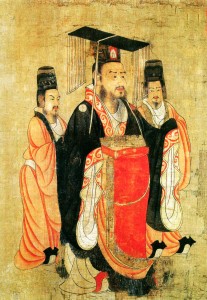 lity of meaning. It first appeared during the Chinese Chin Dynasty (255-207 B.C.) Emperor Chou and his Courtiers all joined in a mighty shout, “Wan-sui” or Banzai! The emperor had just secured the jewel Ho-Shih-Pi from King Hui in trade for a large territory of land. Banzai has been the expression of joy throughout China and Japan since. However, it has taken on a meaning of danger and a fight against all odds.

Banzai has also become a derivative of the Japanese battle cry, “Tenno heika banzai,” i.e. “Long Live the Emperor” during WWII. What gives it its piercing sense of mayhem is the banzai infantry attack. Japanese soldiers used it as a last-ditch effort against looming defeat. Many times the act was suicide.

Now we have restaurants such as Banzai Sushi. They claim to bring us some of the healthiest food on the planet. This gives us a sense of joy and follows the traditional meaning of ban 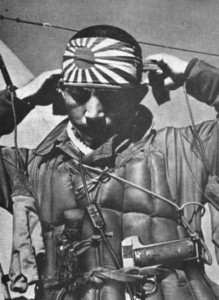 zai. On the other hand, we have Banzai Racing who brings us aftermarket racing parts for rotary engines. This is a derivative of the mayhem banzai, a reflection of danger and possible doom. Banzai skydiving is no different. It follows the path of mayhem. Does that mean the sport has resulted in numerous deaths?

Banzai Skydiving Magazine is delighted to report there are no banzai skydiving deaths. That is in real life. In the James Bond sequel Moonraker, Bond is forced out the aircraft door by Jaws. With options limited, he docks with the pilot taking his parachute and kicking him away to his demise. Even though there are no deaths, that doesn’t mean that some skydivers don’t have the Reaper’s Lotto ticket.

To be a banzai skydiver doesn’t necessary mean that you abide by the procedure of the banzai jump. Recall, banzai is associated with mayhem. Banzai Skydiving Magazine’s data suggest to be banzai also includes skydiving from extreme altitudes, or the sheer number of skydives a person can perform. To be banzai is to take extreme risk that is usually associated with the world record holders. Here is some banzai skydiving videos for your enjoyment.